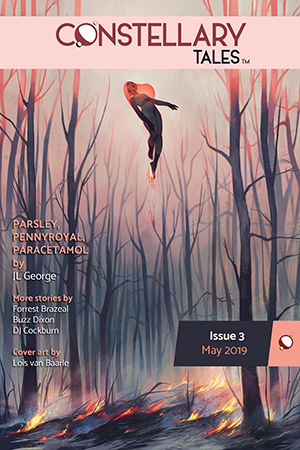 I lean back in the long grass. Tonight is hot, and the vodka bottle wedged between my thighs sweats coldly against my skin. I fiddle with the screw top, loosen it, and then twist it tightly closed again. Not time for that yet. Maybe I won’t need it. I check my bag just in case, counting out the blister packs with my fingers. Vodka and paracetamol. There’s a way out of anything if you don’t mind too much where it leads.

I was vodka-drunk the first time I came out here. Stacey had been telling us all stories about how the wood was haunted and we mustn’t stray from the path, and I was sick of Stacey’s voice and sick of being told what not to do, so I snagged the whole bottle and wandered off into the dark.

That night was warm, too, the vodka turning everything hazy around the edges. There were soft lights between the trees. I’d never seen fireflies, but thought that must be what they looked like.

I’d wandered almost too far, until the others’ voices faded behind me and I hovered on the brink of turning back, starting to feel the neck-prickle of some imagined horror shadowing my steps. The dark had parted like a curtain then, and from behind it emerged the most beautiful creature I’d ever seen. Lin, I would learn later. Eyes like black jewels; a hint of insect-wing iridescence along each cheekbone; and a smile that hinted that Lin had looked into the depths of me and been gently amused by what was there.

I stared dumbly. The first thing that sprang to mind was, “Are you a boy or a girl?” and I regretted it the moment I blurted it out.

Lin shrugged and said, “No,” and continued being beautiful.

Now, sitting beside the tree line, I run my fingers up my clammy skin to check the gusset of my knickers. An old pair, just in case. I’m still hoping it works. Give me a spot of blood. A pain in the gut.

Nothing. I sigh and reach into my bag again, tracing the reassuring shapes of the blister packs.

I was lucky Lin forgave my faux pas, though I only realized how lucky much later, when it finally occurred to me to ask, What are you? We passed the vodka bottle back and forth and talked until the night began to fade and I started up like Cinderella, pausing only to squeeze Lin’s hand once before I fled homeward.

Lin didn’t let me go—not right away. Just pulled me close and pressed their lips to mine, chaste and undemanding.

My mouth tingled coolly with the memory of it all the way back to town. It kept me distracted, and I didn’t notice how high the sun was in the sky. When I took off my shoes and let myself in through the kitchen door, I found my mother waiting. She stared at me as though she’d seen a ghost.

I blinked back at her and decided to brazen it out. “What?” I asked. “I lost track of time.”

Time seemed to bend out of shape around Lin. To stretch like gum or pass as fast as the snap of a rubber band.

There was something strange about Lin, under the clothes. Angles that weren’t quite right. Ridges of chitin at their shoulder blades. I stroked them and wondered if they’d sprout into wings.

“I was like you, once,” Lin sighed against my ear; and I stroked their hair and felt a small chill creep over my skin.

The chill is back now, though the night’s still hot. I unscrew the top of the vodka bottle. I’m not desperate yet, but I’m inching closer—and besides, maybe it’ll warm me up a bit. I shiver.

My period was late three weeks ago. I held stubbornly to my denial for a few days, but soon enough, I realized it was time to speak to Auntie Janet. She knew things, though when I mentioned Lin, she shook her head too quickly and said, “I don’t know about that.”

Instead she gave me parsley, to induce bleeding, and pennyroyal, to drink in a tea if the parsley didn’t work.

“And if that doesn’t work,” she warned, “you’ll need to see a doctor.”

I had my own contingency plans, knowing that Mum would never let me get rid of it, and fearing what might show up on an ultrasound. Paracetamol and vodka. I told nothing of it to Janet; I just nodded and said, “Of course.”

That night, my shoulders began to ache. The pain had sharpened by morning, feeling like my bones wanted to split the skin and push their way out. It spread to my joints as the day wore on. Something hard and ridgy pressed up against the skin of my abdomen.

I wandered through the trees, but Lin didn’t come, nor did blood, and I grew frightened.

Now, ten hours from the pennyroyal with no result, I hug my aching knees against my chest and make my decision. I take a pull from the vodka bottle, and pop the first pill from its pack.

“What are you doing?”

I haven’t drunk enough to hallucinate Lin standing at the edge of the woods. They stare at me, head cocked in puzzlement.

“But it is you,” Lin tells me, stepping close, splaying a hand over my misshapen belly. Their other hand finds my shoulder blade, slips aside the strap of my dress and caresses the ridge of chitin beginning to show there. Then Lin pinches the edge of my skin between thumb and forefinger and pulls it carefully away.

It doesn’t hurt. Like peeling off the dead skin around a fingernail.

“I was like you once,” Lin reminds me. “Time to shed that chrysalis.”

The blister pack falls from my hand, the vodka bottle discarded in the grass. Lin leads me into the wood, barefoot and no longer shivering.

JL George lives in South Wales and writes weird and speculative fiction. She is a 2019 Literature Wales bursary recipient, and her work has appeared in anthologies including Resist Fascism, The Black Room Manuscripts, and Into the Woods.